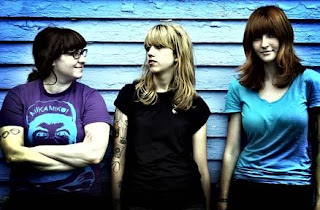 When you spend enough time with someone who, like Cher, would rather ‘Turn Back Time’ than let's say, ‘Push Things Forward‘, like Mike the Brummie your gonna start investing your ear time in music that’s old. Of course, when your passionate about music the origins of your favourite new bands influences are just as important as their own releases.
Which is why, when the Vivian Girls hit up our record shops, stages and blogs in late 2008 the influences behind their Surf Rock, harmony led Girl-Group vocals were an intriguing insight into what shaped their self titled debut LP.
Now Vivian Girls, it must be said, have had ‘Is There Anything…’ in a bit of a pickle of late. On record, in interviews and in pose form, we love em'. Live however, we were turned to cheddar and our big, yellowy, dairy filled heads were grated right off our considerably chipped shoulders.
When they supported the Black Lips back in February we did our homework. As each day passed their Brooklyn-baked output only served to heighten our excitement. 'Tell The World' had us transfixed as if we were driving down a pitch black, deserted road 10 hours into a mammoth road trip, while the sweet, honey-glazed 'Second Date' made for a perfect swoon. All was gearing up for a perfect night, until, that is, they plundered the stage, pins in hand, bubbles in sight.
The performance came and went with much monotony. Barely a pulse was raised, hardly a swoon in sight and neither knees nor hearts were swayed. Vivian Girls clarity and sun-soaked cooings never pierced the fuzz and drone of reverberating guitars and stark, bare and bruising beats. AND as for the banter, stopping the start of a song to ask someone to show a 1000 strong crowd a Japanese handkerchief the size of a...well, HANKERCHIEF did and still does makes my teeth do a grind of nails-on-chalkboard severity.
In other words, we were bitterly disappointed. But in all reality, the worlds fatality is in no way threatened because Vivian Girls had an off night on stage. And lets be fair, it could have just been an off night. There is, as in most cases, a silver lining. They still sound great on record and more importantly we've been re-introduced to one of a our favourite bands of all time thanks to the girls influences.
The Shangri-Las. The portrayers of teen drama induced pop of an all-girl variety. Formed in the 60's the Shangri-Las sound tracked millions of teenage lives and broke hearts the world over with 'Walking On The Sand' and ‘Leader Of The Pack'. The influence they had on a generation of adolescents was obvious, the influence on today’s bands however, not so.
The most obvious is the Vivian Girls. The harmonies and tambourine glistened drums are a direct connection to Shangri-Las, in particular 'Tell The World'. Perhaps not so obvious is the sway the band has on the likes of the Black Lips, The Horrors and a whole host of punk bands dating back to the 70's.
'Good Bad, Not Evil', the 4th LP released by the Black Lips takes it's title direct from 'Give Him A Great Big Kiss', a song which includes the line 'When I say I'm In Love, you best believe I'm In Love, L.U.V', the same line used in 'Looking For A Kiss' New York Dolls 1971 recording.
With regards to musical output, the Black Lips have used '200 Million Thousand' to showcase their influence further. 'I'll Be With You' is more than just a nod in their direction, as is the continual use of a Shangri-La-like drum beat, so beloved of everyone, throughout the record.
As for Blondie, they twice covered 'Out In The Street'. And most surprisingly of all is the pull the Shangri-Las have on The Horrors. Sited as an influence even before 'Strange House', the promise from the band and hacks alike, that the new record is peppered in Shangri-La kissed tambourine and spoken vocals is in equal parts bewildering and brilliant.
So beg, borrow or steal a copy of 'Leader Of The Pack' and it's quality and legend will hit you in the smacker. The class and panache that glistens throughout will leave you in no doubt that the Shangri-Las are a class apart. Hell, if this post and it's ramblings of quality bands don’t, nothing ever will.
Posted by Daniel Wade at 21:34