I always kinda thought that M83 was an electronic version of Mogwai - dense, interpenetrate music; sparse use of lyrics; colossal, ominous and sometimes dizzying. Then I listened to their latest album 'Saturdays = Youth' and feared that in fact they were a bit like Air - French; breathy female vocals; poppy electronica. So I went along to their show at the Scala to find out. 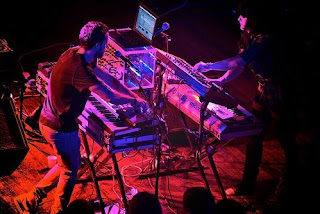 'Their show' is, of course, in some ways incorrect as the band technically comprises only monsieur Anthony Gonzalez, but on tour he was joined by another keyboard player, a guitarist and, weirdly, a drummer in a crudely-fashioned greenhouse. These physically enthusiastic musicians helped to conjure up a bit of stage magic, as this show could have quite easily comprised just one man fiddling away at his laptop and a couple of synths.

M83's songs really do need to be played full volume in a dark room to be appreciated, so the live setting is pretty appropriate. Many of the songs seem to blur into one and it's easy to get completely absorbed in the music, to the point that it's quite startling to get bumped by another gig goer.

The celestial themes in M83's songs are conductive to this kind of reverie, the band is after all named after one of the most conspicuous spiral galaxies in the sky, Messier 83. Add oscillating melodies, languorous tempos and effects-laden guitars, and it really did feel as if we were a world away from grubby King's Cross.

On the other hand, some of the cod philosophy 'big think' lyrics grate a little. In Graveyard Girl, for example, the precious protagonist murmurs, "I'm fifteen years old, And I feel it's already too late to live, Don't you?". Vomit-inducing.

The majority of Saturdays = Youth gets played - although being less familiar with their older stuff I could be a bit biased - with pop track Kim & Jessie getting one of the biggest cheers of the night.

The band curiously all take to center stage once they have finished to bow and wave at the crowd, pantomime style. Within minutes they are back and provide an utterly immense version of Couleurs for the encore. Beats slamming, strobes flashing, it's almost a full-on rave as the crowd start moving and leaping about having stood reverentially still for the rest of the gig.

M83's cinematic sound was pretty mind blowing live, so perhaps I was right on with my original Mogwai comparison...

Photo by adman_jamjar on Flickr
Posted by Helen Jaques at 23:08