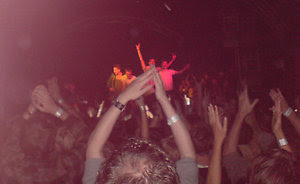 Last night happened to be the gig of my life. A totally moronic thing to say and a stupendously generic repost from someone as fanatical as me but I cant pretend. In fairness though, a huge amount of people streaming out of the venue were of similar mind.

Hindsight is a wonderful thing. If I had sat down at my computer last night and attempted to write this it probably would have read something like this, 'aaaaaaaaaaaaaaaagggggggghhhhhhhh, Black Lips, Bad Kids, me on stage, singing with Cole, willies, Nazi security, stage diving, dragged by the hair, headbutted, 13 bruises, 2 cuts, time of my life, aaaaaaaaaaagggggggghhhhhhhhh! The ramblings of a retard I'm sure you'll agree.
Now however, I'm calm if not still on a bit of a buzz and able to fully appreciate and hopefully capture in words how last night propelled my gig going experience on to a completely different level. A level way beyond anything I'd ever experienced before and beyond anything I'd ever hoped for.

It's rare when a band can forge a relationship with their fans that's akin to a gang mentality but the Black Lips manage to conjure a bond with theirs that's as tight as any that's gone before them.
Throughout their existence they've remained incredibly assessable. Not only have they released a succession of records but they've toured almost continually since they signed to Vice Records in 2006. Scour the Internet and you'll find video's posted of the band on holiday, backstage and on tour. Give the 'Black Lips Hotline' a call and you'll be able to talk to them while they're touring. They never hide behind their success and that's why tonight the unity between both band and crowd made for the most raucous gig of the year.

Before the band had even taken to the stage the tone of the night was set in spectacular, debauched style with Cole Alexander rushing the stage during King Khan and The BBQs set with trousers round ankles and penis in hand. A lot's been said about his willingness to get his willy out and to actually see him do it is almost a privilege. Almost.

From that moment the bar was set and what followed was a night of pure rock and roll carnage. By the time you read this I'm sure the nights events will have been covered so I'm going to leave it here. A lot happened to me at the gig but it was all about the band and the send off they gave to their wonderful, dedicated fans.
All I can say is what unfolded at Heaven will undoubtedly go down in Black Lips history. They wont be back in England for a while but what they've left us to remember them of was a gig that was special for so many reasons. The incredible set, the fat-fucking Nazi security, the crowd interaction, playing guitar with a penis and the riotous atmosphere.

I know 'gig of the year' is used all to frequently by some parts of the media but the night Black Lips played Heaven will always be known as 2008's GIG.OF.THE.YEAR. Fact!

The only coverage I've seen of the gig so far is on NME.com, who have a news story describing "a chaotic gig" and a blog post with details of a security guard "wearing a fine pair of leather gloves on the end of his horse leg-sized arms". They've got videos too.