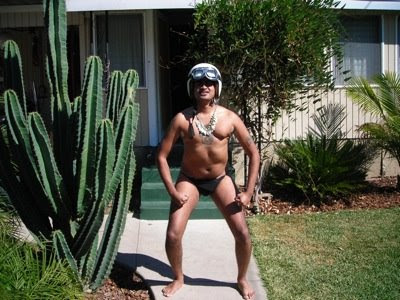 So i would theorize that the BBQ Show refers to the idea that if King Kahn turned up to play your, afternoon thru evening, barbeque (weather permitting) this is the line-up he'd bring - the King himself and one little chef in a turban. Rest assured no-one would miss your do again regardless of how badly your attempt at foil wrapped salmon turned out.

Paring down a ten piece band into 2 guys, 2 guitars and a deformed drum kit should make for a terrible sound, but these guys teased and satisfied a baying crowd with relative ease. King Kahn melded the glorious punk rock'n roll of the current garage trend with pure unadulterated doo-wop 50's influences and showboated his way into the hearts of a hundred kids with freshly topiared moustaches.

Filling the, very few, gaps with surreallist pornographic banter, inspired American in London references and a little stage invasion by the headlining act The BBQ put on a show that felt it was on behalf of ten men.

Oh, the sound, right! Imagine, if you will, the Monkees singing Stepping Stone while a skinny asian dude sprays the effects of an undercooked sausage in their faces, kicks them off stage and then drops to his knees crying. You can imagine that? Try and see King Kahn and The Shrines/BBQ etc...

I'll find a picture from the gig, steal it and post it later!!!
Posted by Richard Anderson at 23:36